Why do a first look at your wedding?

I’ll be honest, I had no idea what the “first look” meant. The term made me picture future husbands and wives sneaking around, trying to glimpse a peek at the other before they say, “I do.” I thought to myself, why would anyone ever want to see the other person before the actual ceremony? Isn’t that bad luck? Wouldn’t it ruin the wow factor and anticipation that builds as both participants anxiously wait to see each other? It turns out that I was a little off, but essentially, the first look does involve the bride and groom seeing each other before the ceremony.

After much investigation,  I found that the first look is when the couple chooses to see each other before the wedding. Typically this may be done in an hour or two before the ceremony. Either the wedding planner or photographer will discuss the first look with you in terms of location and who will be present. The main purpose of the first look is for the photographer to capture the moment when the bride first sees the groom and when the groom first sees the bride – a moment that can be difficult for the photographer to capture in a crowded church with guests snapping iPhone pics. This special and sentimental moment cannot be recreated and is paramount for those couples who wish to have very up close and personal photos.

Now if you are a traditionalist or just a skeptic like me, you might still be asking yourself why exactly you should consider doing this in your wedding. The answer: time. This idea started to make sense to me when I remembered my time as a bridesmaid. I got ready at seven in the morning with the other girls and then was whisked away to the church for the ceremony in the afternoon. It was three in the afternoon when the ceremony was finally over and everybody was growing “hangry” as we spent the next two hours posing for countless photos. Now don’t get me wrong, I would also want pictures with all my family and both sides of the wedding party, but girl was I ready for some brisket and potato salad. The bottom line is that if the wedding party or at least the bride and groom had considered taking pictures before the ceremony, we would have drastically shortened the time between the ceremony and the reception. Besides, you wouldn’t want to miss out on your whole cocktail hour!

The other major reason that couples decide to do a first look is that it tends to be a lot less nerve-racking when there are only a few people watching your emotional reaction than when dozens of eyes are focused on you in a formal space. Some couples want the intimacy of seeing their significant other in a space where they feel like they can react in a more organic and natural way. Some people might break out into tears, giggle hysterically (in a good way), or rush the other in need of a huge hug. The individual might not want to or feel comfortable during the ceremony to react in a certain way whereas the reaction can be genuinely genuine in the presence of only a photographer. No matter the reaction, there is still time for makeup and hair touch-ups.

You might be thinking, what about the reaction when you actually walk down the aisle? Well after I did a little digging into what couples who decided to do the first look thought, I found that having this photoshoot beforehand did not take away from the specialness of seeing the other at the end of the aisle. Some even said it took away the nervousness and allowed them to really cherish the moment.

So although the first look might not be for every couple, consider discussing the matter with an experienced photographer or wedding planner who can help you decide if its the right choice for you! 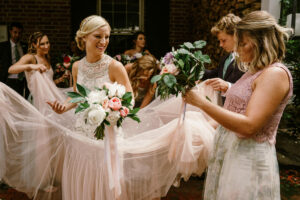 You’re engaged! What are the next ten steps after saying yes? 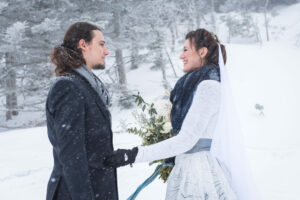